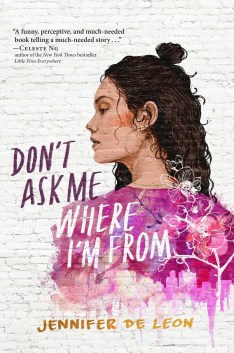 Available For Pre-Order: The Book Depository┃Bookshop

Summary: First-generation American Latinx Liliana Cruz does what it takes to fit in at her new nearly all-white school. But when family secrets spill out and racism at school ramps up, she must decide what she believes in and take a stand.

Fifteen-year-old Liliana is fine, thank you very much. It’s fine that her best friend, Jade, is all caught up in her new boyfriend lately. It’s fine that her inner-city high school is disorganized and underfunded. It’s fine that her father took off again—okay, maybe that isn’t fine, but what is Liliana supposed to do? She’s fifteen! Being left with her increasingly crazy mom? Fine. Her heathen little brothers? Fine, fine, fine. But it turns out Dad did leave one thing behind besides her crazy family. Before he left, he signed Liliana up for a school desegregation program called METCO. And she’s been accepted.

Being accepted into METCO, however, isn’t the same as being accepted at her new school. In her old school, Liliana—half-Guatemalan and half-Salvadorian—was part of the majority where almost everyone was a person of color. But now at Westburg, where almost everyone is white, the struggles of being a minority are unavoidable. It becomes clear that the only way to survive is to lighten up—whiten up. And if Dad signed her up for this program, he wouldn’t have just wanted Liliana to survive, he would have wanted her to thrive. So what if Liliana is now going by Lili? So what if she’s acting like she thinks she’s better than her old friends? It’s not a big deal. It’s fine.

But then she discovers the gutting truth about her father: He’s not on one of his side trips. And it isn’t that he doesn’t want to come home…he can’t. He’s undocumented and he’s been deported back to Guatemala. Soon, nothing is fine, and Lili has to make a choice: She’s done trying to make her white classmates and teachers feel more comfortable. Done changing who she is, denying her culture and where she came from. They want to know where she’s from, what she’s about? Liliana is ready to tell them.

To celebrate the upcoming August 18th release of Don’t Ask Me Where I’m From, I’ll be sharing a Q&A with Jennifer to chat all about her debut! 📚🎉

1. Hello Jennifer, thank you for joining me on the blog today, ‘Don’t Ask Me Where I’m From’ is weeks away from release! Can you tell us what its all about?

Jennifer: Thank you for having me on the blog! Yes, Don’t Ask Me Where I’m From follows 15- year-old Liliana Cruz, a Latinx teen from Boston, as she transfers to a majority white high school. She’s dealing with so much—best friend troubles, annoying little brothers, her dad traveling (again), and she’s trying to fit in at her new high school in Westburg. As a result, she deals with micro-aggressions and racism and stereotypes—and all the while there’s this cute guy…But yes, the racial tensions in the school come to a boil and Liliana has some difficult choices to make.

2. What inspired your novel and did you find anything about the story, either change or evolve during the writing process?

Jennifer: This is the book I wish I could hand to my younger self. It is the story I wanted—and needed—to hear, but didn’t get a chance to see in literature. Later, when I became a public school teacher I saw that while some progress had been made in the category of Young Adult fiction in terms of diversity, there was still a long way to go. So I became even more inspired to write the book that I could eventually give my students. The story definitely evolved during the writing process! For starters, I had the story originally set in the nineties—but I was told that this is technically “historical fiction” (I know!) and that readers might have an easier time connecting if the story was contemporary. Second, the original draft was told in third-person. But once I started writing in first person, Liliana’s voice took over the mic—I mean, the pen, and she just led me the rest of the way.

3. As an #OwnVoices contemporary what would you say you drew from your own experience that found its way into the novel?

Jennifer: Growing up I often moved between two worlds—physically and metaphorically. I grew up in a suburb of Boston, where most of my friends were white and either middle-class or affluent. My parents were born in Guatemala and worked really hard to get our family to live in a neighborhood with a strong school system. That was their ultimate goal: give my sisters and I a solid education. But every weekend we would drive thirty minutes to Boston and visit with extended family. I loved spending time with my cousins and tías and tíos and grandmother. It felt like a different world. So, in writing Liliana’s character, I tried to draw on my experiences of moving in between worlds because she does this on a daily basis when she takes the METCO bus to Westburg and then back home to Boston.

4. According to the summary we see that Liliana has to navigate a wealthy and white high school which forces her to code switch and create two distinct worlds. What inspired you to incorporate this overarching theme of the book and was it something you felt should be present early on in the writing process?

Jennifer: Absolutely. For me, it was super important to show Liliana navigating two distinct worlds. It was the crux of the story, even in the earlier drafts. Code-switching, from my own experience, can be exhausting. And it can take a mental toll, too. I wanted to show how one character, Liliana, is confronting the need to code-switch for the first time in her life, at least on this level. Up until now she has lived and breathed solely in the bubble of her neighborhood in Jamaica Plain, an area of Boston. But that all changes when she joins the METCO program and begins going to school at a predominantly white school. Although I didn’t have this exact experience of being part of the METCO program, I did feel that I had to constantly code-switch depending on where I was and who was in the room—and this only amplified once I got to college.

4a. Based on the summary, it looks like your debut will discuss various themes from Latin-American identity, race, and immigration to name a few. Which theme or topic did you feel the most inspired to explore and is there a particular message that you wanted to get across to readers?

Jennifer: Such a great question! As I was writing Liliana’s story, I felt inspired to show how Liliana herself is learning so much about her culture and identity and background as she navigates a new world—Westburg. Liliana is not an “expert” on Latinx culture or even Central American culture. She has more questions than answers. I think so many second- generation teens can feel this way. I know I did. On one level, you don’t fit in with the “mainstream culture” but then on another level, you don’t exactly fit in with your parents’ culture either. All the while, people—even well-intentioned ones—ask questions like I’m Wikipedia or something. It took me a long time to learn more about Guatemala, where both my parents are from, and I still have so much to learn. So, yes, I hope this book inspires readers, especially young people, to learn more about their family and their background(s), because we are all from somewhere.

5. What did you enjoy the most writing about Liliana’s character? & Why?

Jennifer: Ooooh, I loved writing Liliana’s voice. She is sassy and smart and has a real funny way of saying things—she doesn’t hold back. And I love that about her.

6. As a Latina reader myself I feel like  ‘Don’t Ask Me Where I’m From’ will make it a point in navigating Latina/Latine identity and I think that’s great. Is that something important you were hoping readers take away from the novel?

Jennifer: Definitely. I hope that this book can shed (more) light on the understanding that the the Latinx community is not a monolithic one. Yes, we share so many commonalities (on levels of language, culture, family traditions, etc.), but just the same, there are as many differences between someone who identifies as Puerto Rican vs. Mexican vs. Guatemalan vs. Venezuelan, and so on and so forth. I also hope that readers—again, especially young people and especially Latinx teens—can close the book and feel proud of where they’re from, that they feel empowered by their history and not burdened by it.

7. Can you share one of your favorite quotes in ‘Don’t Ask Me Where I’m From’?

“I’m sick of people asking me where I am from. No—where I am ‘from-from.’ I am sick of people assuming I wasn’t born in this country or that I don’t speak English or that I eat rice and beans every night for dinner.” Two girls laughed. But in an I got you way. I felt lighter and lighter. And I couldn’t stop.

Don’t Ask Me Where I’m From is releasing August 18, 2020! Thank you for joining me on the blog tour today.

Are you looking forward to reading Jennifer De Leon’s debut? 🎊🌸📚✨

3 thoughts on “Blog Tour: Don’t Ask Me Where I’m From by Jennifer De Leon {Q&A}”