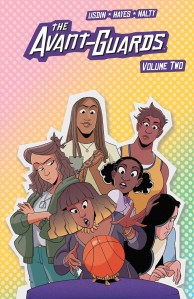 Available Through The Book Depository: The Avant-Guards Vol. 2

Summary: The Avant-Guards have been on a roll when it come to their newly-formed basketball league and Charlie has been getting more comfortable with her new teammates, but when they hit the end of their winning-streak, will these new friendships survive? As the Avant-Guards struggle to move forward, they’ll soon learn just what it means to truly be a team― on the court, and most importantly, off the court too.

My Thoughts: The Avant-Guards Vol. 2 is phenomenal continuation to a female-led sports series that at its core, is about friendship! This volume delves more into the team and their lives off the court as the season continues! The series art is colorful, features a great cast of characters and a page-turning story!

Although I don’t talk about it much on my blog, The Avant-Guards is easily one of my favorite graphic novel series (tied up there with Sera and Tea Dragon Society). I fell completely in love with Vol. 1 last year and there was no surprise I’d be continuing with the series.

As Charlie has become more comfortable with the team, found her loyal group of friends, also navigating her relationship with Liv, this volume very much focuses on the rest of the team and what they’re up to when not on the court.

While there are many things I love about this series, it’s very clear how much care is given to our delightful cast from Jay to Ashley, Nicole, Tiffany, Liv, and Charlie. No matter how much page time they have, their personalities shine through in every moment.

As the team continues their season at away games, you learn even more about their hobbies and them as a whole while they aren’t practicing. Jay has their art, Ashley has been recovering from an injury and we see its keeping her from playing a game she loves. There’s a joy she feels from coaching the team despite missing the game and her budding relationship with her physical therapist.

We learn there’s more to “cynic” Nicole and resident witch Tiffany too!

What makes this such a fantastic sequel is because not only are the girls loyal and passionate about what they love, but the series itself realizes this too! With each page you see the love and appreciation for these phenomenal characters! Each of these women have their own quirks, personalities, and energy that shines whenever their on the page.

There’s specific plot points/arcs in this volume that allow the cast to shine: Jay’s art exhibit, Ashley’s birthday, the film fest night for Liv, even when we learn more about Tiffany and her family! Even though Charlie is more in the background during this volume, I adored getting the cute moments between her and Liv!

But what stands out the most across both volumes so far is how Charlie, Liv, Jay, Ashley, Tiffany, and Nicole are there for each other, to lift each other up always! Their dedication to friendship and teamwork always fills me with so much joy and is just inspiring! I cannot pick a favorite character, I LOVE them all ♥♥

I can’t wait to see how the team dynamic/friendship develops across the rest of The Avant-Guards series! Some of my favorite moments include their practice and when their hanging out together, like at Jay’s art exhibit.

This second volume also delves into an underlying and subtle conflict, where their league is struggling financially. While it weaves into the story in a quiet sort of way, I liked how this obstacle further emphasized their dedication towards teamwork and finding a way to solve the issue!

The writing is really good, it delivers great dialogue and helps to build the development of our main cast! With this installment focusing more on the other teammates, one detail that just adds more to the already wonderful cast is the internal 1st -person dialogue bubbles that tells us a bit more about how the ladies are feeling at a particular moment. Although its brief, it shows us how these characters perceive themselves in ways we probably didn’t expect.

As with Volume 1 also, the panel and art continue to be a highlight of the series! The colors are bright and eye-catching, making the series an absolute visual delight! Paneling is also metaphorical in a way, limiting the use of full or large panels for impactful moments or action-packed scenes during the games, another example of this would be the final panel during Jay’s art exhibit with their partner Tyler.

The bright colors and dynamic art style showcase the fun, lighthearted ton of the series.

The emphasis on small, overlapping, tighter-fitting panels also leaves tons of room for seeing more of the characters, setting, and visuals! The paneling also emphasizes the action, movement, and expressiveness of both characters + scenes.

One example of this where it was cleverly drawn was: When Jay & Ashley are passing out flyers, even the full page spread of Jay and Tyler looking at a painting together. There was also a moment in Ch.6 where the paneling brilliantly was presented in the shape of a basket to emphasize the action! (It mirrored a similar scene in Vol. 1 where there were panels shaped in the form of a basketball). Overall, the way the panels are presented in this series is phenomenal!

Friendship continues to be a hallmark of the series and no matter what, the Avant-Guards always come together to support each other in different ways! The series also continues to feature characters of color and Queer women, and just continues to be a diverse/inclusive series! For ex. we get introduced to Jay’s partner Tyler (who also goes by they/them).

My only issue with this volume is that I wanted more page & plot time with these characters, because the last page does leave the ending somewhat abrupt leading into Vol. 3. It just felt like there needed to be MORE whether it was more Liv/Charlie moments, Tiffany/Nicole bonding, or just the team hanging out. The story is just so wholesome and they deserve the world!!

The Avant-Guards Vol. 2 is a fantastic sequel to a series that can only continue to get better and better! Its a series dedicated to its characters and focuses on friendship, centering around a college basketball team! The colorful artwork, wonderfully diverse cast, and immersive story makes The Avant-Guards one of the best sports series out there!

One thought on “The Avant Guards Vol. 2 by Carly Usdin Review {Graphic Novel}”