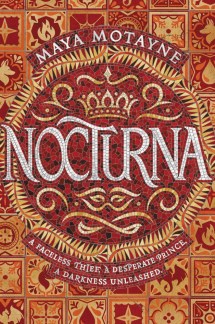 Nocturna by Maya Motayne (A Forgery Of Magic #1)

Available Through The Book Depository: Nocturna

Summary: To Finn Voy, magic is two things: a knife to hold under the chin of anyone who crosses her…and a disguise she shrugs on as easily as others pull on cloaks.

As a talented faceshifter, it’s been years since Finn has seen her own face, and that’s exactly how she likes it. But when Finn gets caught by a powerful mobster, she’s forced into an impossible mission: steal a legendary treasure from Castallan’s royal palace or be stripped of her magic forever.

After the murder of his older brother, Prince Alfehr is first in line for the Castallan throne. But Alfie can’t help but feel that he will never live up to his brother’s legacy. Riddled with grief, Alfie is obsessed with finding a way to bring his brother back, even if it means dabbling in forbidden magic.

But when Finn and Alfie’s fates collide, they accidentally unlock a terrible, ancient power—which, if not contained, will devour the world. And with Castallan’s fate in their hands, Alfie and Finn must race to vanquish what they have unleashed, even if it means facing the deepest darkness in their pasts.

My Thoughts: Nocturna is a Dominican-inspired YA Fantasy you don’t want to miss! Motayne’s debut follows a grieving prince and a clever thief who have to save their world when a dark magic is unleashed! Character development, a wonderfully developed story, and an immersive world are just some of the many highlights of this delightful fantasy debut!

Nocturna is a novel forged in magic, complex topics and themes, alongside the deep introspection we uncover about the main characters Finn and Alfie!

You know when you read a book and although you know more is coming, you can’t help but feel sad that this introduction to a series is over? That’s how I felt the second I turned the last page of Nocturna! Without spoiling anything my thoughts summed up to:

How am I supposed to wait for book 2?!? I need more page-time with my prince/thief duo–I can’t believe I reached the end!!😭💖

Motayne’s debut is one I had been looking forward to for months because coming from a Latinx background, I was just so incredibly happy to see more Latinx YA (especially fantasy) being released! And more specifically, I was so excited to see more Latinx representation (in this novel its Dominican specifically) get the spotlight!

Just reading the Spanish phrases/words I grew up hearing, recognizing the food, etc. just made me SO SO happy!! 💞 Also just to get this out there, there’s a heist & thievery!! + another bonus ✨: Nocturna has chapter titles & they need to be appreciated 😆💖 because they’re great + who doesn’t love chapter titles!?!

Told through a 3rd person POV, we follow quite a few characters throughout this novel but two that I want to focus on are Prince Alfher (or Alfie) and Finn Voy (though I absolutely loved Alfie’s cousin Luka)!

Alfie returns to his kingdom of Castallan grieving over his lost brother Dez and is unsure he has what it takes to assume his role as king. But, he still hasn’t given up hope on finding his brother, who he still believes is alive! Finn, is a face-changing thief who gets forced to do a seemingly impossible mission of stealing a vanishing cloak from the royal palace!

The 2 collide and Alfie connects with an ancient dark magic that gets unleashed unto the world while trying to save Luka–now the two must team up to stop it!

To get into more detail, since Dez’s death after an attempted royal coup, Alfie has felt nothing but grief for his brother who he believed to be the rightful heir. Not only does he carry that loss with him, but also this feeling of not being the ruler that his kingdom needs! He still holds this anger inside of him for the world having moved on from Dez and he’s still holding onto hope! ( I loved the story of Dez’s carved figurines).

Finn lost her parents at a very young age and has learned to survive on her own as a thief, but also carries the hurt that was caused by her manipulative (adoptive) father figure, Igancio. He essentially felt that she was destined to be just like him, so he manipulated her into always remaining at his side–until one day she finally left!

I can’t put into words just how much I loved Alfie & Finn! The depth to their character arcs and development was another highlight of this book. Looking back, I found that at its core, Nocturna is really about two people from opposite sides who are overcoming grief and obstacles to become better people and in turn be their best selves!

They don’t want to be selfish about their choices to bring about their happiness, but they learn to not let their grief cloud their judgement as they learn to work together and I LOVED that message! Exploring their grief so deeply throughout the story allows them to talk about it and grow!

They both felt so real and I could understand each of the obstacles they were facing throughout the book, but I loved that their journey to growth really developed with one another! Finn’s wit was so much fun to read as was Alfie’s cleverness and how his shyness really bounced off of Finn’s confidence! I loved their banter and friendship so much, their dynamic was great!! 💞💞

Overall though I loved that with each character they all felt so real!

Now onto the magic system–which was one of my many favorite world-building elements to explore in Nocturna!

Within this world that Motayne created, we explore this personal magic that one can carry called a propio! Within the novel it explains that magic itself moves in a cycle of sorts with people–which creates a balance. People can house magic within them and the magic itself “[offers] its wonders to man…” (8).

The magic can be elemental, like in Alfie’s case to control water or a supernatural type of magic, like Finn’s to change her appearance! There’s this overarching theme, however, throughout Nocturna that time and time again (especially when our main characters encounter dark magic) there’s a balance!

I loved that–especially as its explored through the main characters Alfie & Finn! For me personally, I found that the forbidden magic they encounter was a kind of metaphor for the power they wish they had to overcome their traumas.

There’s so much depth to the magic system, from influence of language (Spanish), but also how the unknown/dark magic can impact each person differently–in this case we see that when Alfie attempts to carry dark magic alongside him throughout his journey with Finn!

Next, there’s such a present discussion on on colonialism, slavery, and its effects! I don’t often see this explored in YA Fantasy (from recent memory the only books I’ve seen that explored this were Children Of Blood And Bone & The Gilded Wolves–though that’s more of a historical fantasy). Overall though, I applaud these female authors of color exploring topics like this in YA because again, its something that I don’t always see talked about! As an aspiring YA Fantasy author of color as well, its so inspiring to read these books that explore real-life topics and themes with such depth and complexity!

Castallan in the past, was taken over by Englassen colonizers and with that, their culture was taken away (especially their magic)! Over time they reclaimed what they lost and Nocturna explores this in such a layered way!

Now onto something I wanted to discuss because as a reader who is from a marginalized background, its disheartening to see books by authors of color so quickly compared to previous books.

I’ve seen Nocturna compared a lot to ADSOM (I’ve read them both) and for me personally I didn’t read this book at all with that comparison in mind–the only similarity I saw, but even then it was completely different–was how Finn & Kell can traverse to different locations. Overall I can completely understand the points being made, but for me Nocturna was a wholly unique fantasy in its own right. Also Nocturna tackles discussion of poverty, slavery, and colonialism (which ADSOM doesn’t).

Of course I know that not every book is for everyone and every reader has differing opinions! ^_^ Overall, I just hope with my little discussion here, people are willing to look past some parallels because at the end of the day these stories, characters and inspirations–are different.

Now onto why its a 4.5: There were a few moments of slow pacing. + As the story progressed I wasn’t really liking the villain all that much anymore–I saw what Motayne was trying to do and when looking at it from a character arc perspective I see what it did to Finn’s character in allowing her to grow, but the villain himself was just kind of bland at points.

I would have loved more of an exploration between Finn & Alfie in their world and the magic their forced to carry with them instead of a lot of focus on this villain, but in the end it did work with the story and I loved the ending!! I may have shed a few tears 😭💖

But overall, I can’t wait to see where Alfie & Finn’s journey is headed in the sequel! I’m excited to learn more about the world of Castallan, the magic system, my favorite characters Alfie, Finn, Luka–and see what they’ll be tackling next!

Nocturna is a YA Fantasy debut you should definitely add to your to-read list! If your looking for a fantasy that’s character-driven, has an immersive setting that explores a variety of themes, is filled with adventure, a complex magic system, and a delightful main cast, don’t miss out on Motayne’s debut! Nocturna is a YA Fantasy adventure you’ve got to pick up!