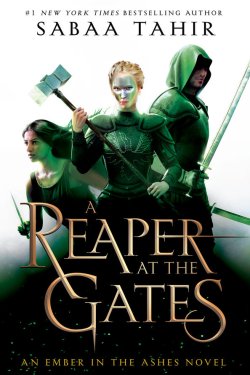 Summary: Beyond the Empire and within it, the threat of war looms ever larger.

The Blood Shrike, Helene Aquilla, is assailed on all sides. Emperor Marcus, haunted by his past, grows increasingly unstable, while the Commandant capitalizes on his madness to bolster her own power. As Helene searches for a way to hold back the approaching darkness, her sister’s life and the lives of all those in the Empire hang in the balance.

Far to the east, Laia of Serra knows the fate of the world lies not in the machinations of the Martial court, but in stopping the Nightbringer. But while hunting for a way to bring him down, Laia faces unexpected threats from those she hoped would aid her, and is drawn into a battle she never thought she’d have to fight.

And in the land between the living and the dead, Elias Veturius has given up his freedom to serve as Soul Catcher. But in doing so, he has vowed himself to an ancient power that will stop at nothing to ensure Elias’s devotion–even at the cost of his humanity.

*A Reaper At The Gates review has major spoilers*

My Thoughts: A Reaper At The Gates is a dark, haunting, and character-driven continuation to An Ember In The Ashes series! Character development, expansion on lore and mythology take center stage as war looms on the horizon!

Wow, where to start with this book! The characters grow so much throughout Reaper:  Laia, Elias, and Helene are faced with supernatural forces as they come to terms with the path that destiny has laid out for them!

To start I loved the immense growth we see from each of the main characters! There is so much internal development that they undergo from acceptance to heartache.

What I found so heartbreaking, was reading about the separation between Laia & Elias! With both of them on their own journeys and learning how they must accept or navigate the destinies/prophecies that are leading them closer to their fates.

Laia is now fighting to save her people, Helene must make sacrifices as she leads the way for battle, and Elias must choose between the people he loves and his role as Soul Catcher if he’s to prevent ghosts from taking over the mortal world.

I loved the development to dynamics with Helene, Harper, and Dex! Seeing how they help Helene as she tries to make her way back to Antium to take down the Commandant.

Their dynamics between Helene, Harper, and Dex (at least from what I remember from book 2), feel so much more developed in this book and we really see the powerful bond they’ve forged with each other throughout this journey.

Laia is on a quest to take down the Nightbringer and won’t let anything get in her way. She meets a new friend and reconnects with familiar faces along the way.

One of the new characters introduced, who I really loved was was Musa! He was Laia and Darin’s new friend who helps them on their way to come up with a plan against the Nightbringer! His page time was definitely cut earlier than I would have hoped, but I am beyond excited to see where his journey is headed in book 4!

Aside from new characters, secrets are revealed, and there’s so much character development as the plot expands and what is set for the finale, is clear!

While A Reaper At The Gates definitely has its heartbreaking moments, the ending and parts throughout definitely remind us there is hope for the beloved characters we’ve followed so far! There is one scene in particular at nearing the end that really surprised me & I can’t wait to see where it leads a couple of our main characters!

Elias’s story focuses so much around his fate as the Soul Catcher and how his journey is about him letting go of his humanity to accept the role he has been chosen for.

It was heartbreaking to read how the love he has for his friends and family slowly had to fade away in order for him to accept the magic he needed as Soul Catcher in The Waiting Place.

I will admit, what makes this book so difficult for me to rate a full 5 is the pacing for the first half! Because of it, the stakes didn’t feel as high as with the previous books and it wasn’t until the last half (or a bit after) that I finally found the story picking up!

Because of that, there was a lot of elements from supporting characters to plot pacing that felt a bit off for me.

The writing made elements such as setting, supporting characters, etc. feel very under-developed, for me personally. But as I made my way to about the 50% mark, I definitely found myself connecting better with the story.

What broke my heart, honestly was ch. 53 (;´༎ຶД༎ຶ`) (;´༎ຶД༎ຶ`) I’m still not over it!! As an avid RPG gamer, this chapter reminded me very much of a scene that’s similar in one of my favorite video games and it just–left me so emotional and devastated!!

The idea/themes of destiny and fate are explored so much in this book! I find that those themes always allow me to connect even more to a story because they are themes I just really love exploring and find they add so much to a story!

War and its lasting affects are also huge factors that are explored in the later 1/2 of Reaper and are so heart-breaking, but very much reflect the world today. Tahir explored these themes that leave you so impacted and shaken.

The mythology and lore of the world is also given center stage as they get woven in deeper not only into the story, but to the characters as well!

Tahir balanced mythology, character dynamics, plot, all so wonderfully that finally reaching the end, I am still unsure how I will be able to wait for Book 4!

A Reaper At The Gates is the epic continuation to Tahir’s, An Ember In The Ashes Series! The mythology, characters, themes and so much more all weave together to bring a tale that will leave you on the edge of your seat for the finale!