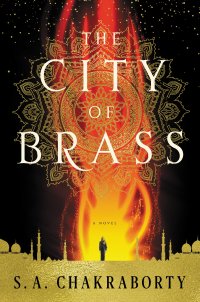 The City Of Brass by S.A. Chakraborty (The Daevabad Trilogy #1)

Summary: Nahri has never believed in magic. Certainly, she has power; on the streets of 18th century Cairo, she’s a con woman of unsurpassed talent. But she knows better than anyone that the trade she uses to get by—palm readings, zars, healings—are all tricks, sleights of hand, learned skills; a means to the delightful end of swindling Ottoman nobles.

But when Nahri accidentally summons an equally sly, darkly mysterious djinn warrior to her side during one of her cons, she’s forced to accept that the magical world she thought only existed in childhood stories is real. For the warrior tells her a new tale: across hot, windswept sands teeming with creatures of fire, and rivers where the mythical marid sleep; past ruins of once-magnificent human metropolises, and mountains where the circling hawks are not what they seem, lies Daevabad, the legendary city of brass? A city to which Nahri is irrevocably bound.

In that city, behind gilded brass walls laced with enchantments, behind the six gates of the six djinn tribes, old resentments are simmering. And when Nahri decides to enter this world, she learns that true power is fierce and brutal. That magic cannot shield her from the dangerous web of court politics. That even the cleverest of schemes can have deadly consequences.

After all, there is a reason they say be careful what you wish for . . .

My Thoughts: The City Of Brass is an enchanting and immersive fantasy debut! We follow Nahri as she embarks to the City Of Brass and learns more about who she is! There’s politics, intrigue, vivid world-building, and a richly plotted tale that will take you on a grand adventure!

Set in 18th century Cairo, The City Of Brass follows Nahri, a thief who uses her tricks as a con artist, abilities to speak a number of languages (even ones where she is unaware of their origins) and her ability to sense ailments or sickness in people, just to get by.

When she gets called to heal a young girl by the name of Baseema, whose been possessed by a djinn, or more specifically an ifrit, she soon finds herself being attacked by ifrit and ghouls, until Dara, an ancient djinn warrior comes to her rescue!

He helps her flee and tells her that she’s being followed and it won’t stop until she’s safe in Daevabad, the legendary City Of Brass.

She’s never believed in magic, regardless of the tales she hears, but that all changes when she embarks on her grand adventure!

While on their way to The City Of Brass, Nahri learns more about her origins as both she & Dara learn more about each other and of the magic + history of Daevabad.

What really surprised me about this novel aside from the intricate plot, was the dual POV! I was not expecting it and it really brought depth to the overall story and you can’t help but fall in love with both of our narrators, Nahri & Ali.

We have Nahri, the main character to who finds herself leaving her home in Cairo behind to reach the City Of Brass and Alizayd al Qahtani, a prince of Daevabad who lives within the City Of Brass.

Additionally, a few prevalent themes I found in this novel was identity and acceptance. As Nahri learns more about her origins, we see her coming to accept this new identity and past she never knew she had. Yet, we also see how she struggles to understand who she is as she finds herself forcing to adapt to this new identity in the City Of Brass.

As for Ali, he knows he will always have his fascination for the human world and not be the outgoing or forceful ruler as his brother Muntadhir, but accepts that he is well aware he wants to bring change to his city and will do what he can.

Throughout the story, we also learn more about Ali’s family, like his brother, sister, and father, and the stark differences that make Ali feel like he doesn’t belong and the change he hopes to bring to Daevabad if he is to ever become ruler.

I also really loved how Chakraborty built Narhi and Ali’s development when they slowly start to build a friendship, how alike they really are and how they find where they belong in their world.

I loved following both of them on their own individual journeys and seeing how their stories intertwine as the story progresses.

While both Nahri & Ali are equally fascinating & compelling characters, I couldn’t help but really love Ali!! He’s smart, shy, and underestimated at points throughout, but just wants to do whats right for the city and his people.

I really find stories surrounding djinn to be so fascinating and this novel really builds a rich history into this 19 century setting, from the culture of the djinn, differing tribes, to Suleiman & his seal. Additionally, what also drew me to this book aside from intriguing summary, was the mention that it was perfect for fans of The Golem And The Jinni (one of my all-time favorite books 💕)

While this novel is more fast-paced, I definitely found that elements of this novel really reminded me of The Golem And The Jinni and can see why they were compared!

I’ve always been hesitant with 3rd person POV, but Chakraborty easily weaves in both Nahri and Prince Ali’s POV’s beautifully as they build both the setting and history of the world, not only of 19th century Cairo, but of Davebad too!

Through the writing-style you really get a wide scope of not only the world, but the characters too and can’t help but connect with them as you learn more about their past and their own agendas.

The characters and mystery of the plot were just some of the many aspects that I adored about The City Of Brass so much! ❤ ❤

The overall world and atmosphere of the story is immersive and magical. The City Of Brass was one of those novels, for me, that really took me on an adventure and just immersed me into such a complex and dazzling world!

I’m also a big fan of politics woven throughout fantasy tales, and this novel really makes it such an integral part of the story (especially through Ali’s POV). From the inner workings of the palace as Ali tries to keep his own secrets hidden, to the politics that surround the differing djinn as they live in Davebad.

The plot is rich and there’s so much depth to it, once you reach the last page, you just have to know more!

My only issue was that the plot did start to get slow-paced at some points throughout and was hoping for some more depth to Dara and the writing at points to expand on certain aspects of the plot.

The City Of Brass is a richly woven tale with politics, fascinating world-building, and a stellar cast of characters! You’ll find yourself turning the page as you become enchanted with the mysterious and immersive city of Davebad!

This is not a debut to miss!