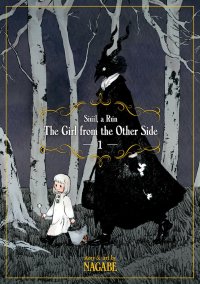 Summary: In a world split between the Inside and the Outside, those living in both realms are told never to cross over to the other side, lest they be cursed. A young girl named Shiva lives on the other side, in a vacant village with a demonic guardian known only as “Teacher.” Although the two are forbidden to touch, they seem to share a bond that transcends their disparate appearances. But when Shiva leaves Teacher’s care to seek out her aunt, the secret behind her mysterious living arrangement comes to light.

My Thoughts: As though it were a fairy tale, The Girl From The Other Side is both dark and enchanting!

This manga was utterly fantastic!! I found this one while scrolling through Goodreads and it was the cover that originally had me sold! However, once I read the summary I knew I would adore it!

The story unfolds as we come to learn about the rules that govern the world for the Outsiders, who are still human to some degree, but are creatures of darkness that can turn men to monsters with a single touch.

A dark and mysterious plot drives this manga forward, with such in-depth characters and themes of family, and the shades in between light + darkness!

Shiva, a young girl, lives on the Outside w/ Teacher who is her guardian (+ an Outsider himself) in a quiet little cottage and watches over her as she waits for her aunt to return.

Shiva is a very optimistic child and is eager to explore what’s in the forest beyond the small cottage where they both live.

However, Teacher wants to ensure her safety and keep an eye on her at all times, because he doesn’t want her to become an Outsider as well!

Teacher is a very kind and understanding, however when its discovered he has a secret which is vitally linked to Shiva, he is unsure of what to do because he wants to ensure her happiness.

Regardless, he does all he can to keep Shiva safe, even when she finds herself deep in the forest and runs into guards from a near by town.

There’s a lot of mystery surrounding the Outsiders and how they came to be, yet the guards from a near by town suspect it was neighboring town, however no one knows for certain.

There’s a big discussion on how we view those who are different (w/ the Outsiders vs. Insiders for instance) when guards search the woods of the Outside to ensure the safety of their town as they continue their search to rid themselves of Outsiders.

The sophisticated, yet subtle artwork is masterfully done. Teacher, for instance, being an Outsider is a hybrid sorts (donning a shadowed animal-head, mouthless face and piercing eyes). However through the art his expressions are carried through mostly his eyes, yet also in the elegant way he carries himself.

Through the artwork, Nagabe also brings an eeriness to the world itself, but transports the reader in an instant.

The Girl From The Other Side is a dark, mysterious and magical tale that has so much depth from its characters to plot, you will be hooked from page 1!

3 thoughts on “The Girl From The Other Side: Siúil A Rún Vol. 1 {Manga Review}”