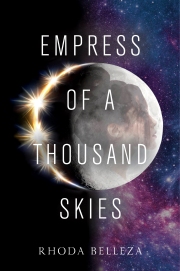 Empress Of A Thousand Skies (Empress #1)

The only surviving heir to an ancient Kalusian dynasty, RHEE has spent her life training to destroy the people who killed her family. Now, on the eve of her coronation, the time has finally come for Rhee to claim her throne – and her revenge.

ALYOSHA is a Wraetan who has risen above his war refugee origins to find fame as the dashing star of a DroneVision show. Despite his popularity, Aly struggles with anti-Wraetan prejudices and the pressure of being perfect in the public eye.

Their paths collide with one brutal act of violence: Rhee is attacked, barely escaping with her life. Aly is blamed for her presumed murder.

The princess and her accused killer are forced to go into hiding – even as a war between planets is waged in Rhee’s name. But soon, Rhee and Aly discover that the assassination attempt is just one part of a sinister plot. Bound together by an evil that only they can stop, the two fugitives must join forces to save the galaxy.

My Thoughts: Belleza delivers a character driven sci-fi space opera that discusses very timely issues + politics as a princess + a tv celebrity find themselves on the run!

Empress had so many great elements! It was very plot + character driven and had little to no romance for most of the novel.

Being told through dual POV (3rd person) and it worked extremely well for this story! Because both characters aren’t exactly together for most of the novel, we get to see the politics, culture, etc. of the unique worlds from differing perspectives.

Aly, due to his Wraetan background is seen as different by others and fears if he is to do anything to damage his reputation while on TV, it would look bad for all Wraetans. Reading that made me feel so bad for Aly (with all the pressure upon his shoulders). Reading from his POV brought up very relevant and timely issues one could mirror to our own world that is sadly still seen today, how there are those out there who aren’t as accepting when they view people from other cultures and see them only as “different.” Which is so wrong!

Through Aly’s POV we see that just because he is Wraetan, he is framed from Rhee’s assassination.

Aly really goes into depth about his war-torn home and the struggles he’s faced to get to where he is. I loved the expansion on this subject, not only because it mirrors our own and gives perspective, but it shows how wrong/harmful these ideas are and can be.

As with Rhee, she flees her home planet after she nearly escapes an assassination attempt on her own life. She finds herself charting across different planets to track down who she suspects is behind her assassination and reclaim her throne!

She was very determined and came up with plans, however usually hesitated when the moments to enact her revenge finally came. With this all suddenly upon her, it would make sense that she would have her reasons for hesitation. Regardless, while she does make mistakes, she grows and no matter what happened along the way, she stayed true to herself and her goal. She never strayed away from it!

My heart broke reading what he had faced! I loved reading from both POV’s however Aly’s was definitely my favorite! Aly lost his family, his home, faced discrimination but no matter what, he kept pushing forward and never gave up fighting to clear his name.

From what I’ve read, I’m pretty sure there is a sequel! So I’m hoping with the next one, Rhee, Aly and the other characters introduced are given even more background and development, because there was so much mystery surrounding these characters.

I loved the unique aspects that Belleza was able to weave into this story, from the memory cube technology to the unique creatures found across the planets.

Additionally, a majority of the cast of characters were people of color, which is amazing!! I’m always happy to read a book with a diverse cast!! ❤

For the plot as a whole, I was kept surprised with each and every page! I could never guess where the story was headed which I adored, because it kept me invested from start to finish!

As for the pacing it was rather slow for me, however the mysteries that unfold had me turning the page to figure out who was behind it all!

As mentioned + introduced above, Belleza continued to discuss very timely issues such as immigration, politics, views on technology & privacy + so much more!

That is an aspect I loved so much about Empress! She really makes them an integral part of the plot and overall themes of the novel that really have you thinking all through out the entire story.

Additionally, there are so many layers to the story as a whole. Essentially, from Rhee’s perspective you learn there is a treaty in place and while it made the worlds stable when Rhee’s father established it, there’s still discrimination and tension between the planets.

First off I will admit, the summary was a little misleading for me, because going into the book I assumed Rhiannon + Aly would be together for most of the novel, however that wasn’t the case which is what I was expecting.

There were some moments I wish the worlds themselves were fleshed out a little more, while a lot of social issues are brought up within each world and discussed when Aly or Rhee visit them, in terms of descriptions + atmosphere I wanted a little more!

Empress Of A Thousand Skies is a thought-provoking story which takes the time to discuss very timely issues, introduces multi-layered politics and world-building, puts characters and plot at the center, and overall delivers a refreshing and unique tale in YA Sci-Fi!