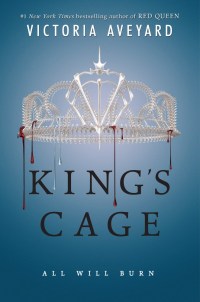 Summary: Mare Barrow is a prisoner, powerless without her lightning, tormented by her lethal mistakes. She lives at the mercy of a boy she once loved, a boy made of lies and betrayal. Now a king, Maven Calore continues weaving his dead mother’s web in an attempt to maintain control over his country—and his prisoner.

As Mare bears the weight of Silent Stone in the palace, her once-ragtag band of newbloods and Reds continue organizing, training, and expanding. They prepare for war, no longer able to linger in the shadows. And Cal, the exiled prince with his own claim on Mare’s heart, will stop at nothing to bring her back.

When blood turns on blood, and ability on ability, there may be no one left to put out the fire—leaving Norta as Mare knows it to burn all the way down.

Looking back while Glass Sword wasn’t the strongest addition to the series, King’s Cage definitely delivered!

I’m never let down by Aveyard’s writing and as always I find myself surprised at how fast I finish reading her books!

The story starts off with Mare as both Maven’s prisoner and pawn. She is being tortured and due to the Silent Stone, can’t use her ability!

Maven forces Mare to use her identity as the “Lightning Girl” to bring Newbloods and Reds to his side and expand his power as king.

An aspect which took me by surprise was seeing the inner workings of Maven’s rule! Mare states during her time in the palace, he looks weaker and more tired. Due to all the stress he is put under, he knows he can easily loose his grip on power, so he will do anything to keep the throne!

The Scarlet Guard doesn’t give up hope to get Maven off the throne & it was definitely a surprising twist to see them get stronger as the months passed, becoming an unexpected obstacle for him.

Mare comes to terms with how she treated people back in Glass Sword + over the course of the novel she really changes and reflects on her behavior to become a better person.

The last act mostly revolves around getting Mare comfortable with the guard/her friends & family now that she’s escaped + prepping her for to join the expanded guard ready to fight Maven!

The aftermath of the battle was definitely fast-paced and had me unsure what was going to happen next!

*No spoilers, but while I didn’t absolutely love it, I really enjoyed the ending to King’s Cage and I definitely feel the final installment will end the series off on a good note!

One of the best parts of this series is Maven! Aveyard really knows how to handle his character and we really come to know more about him and his past! While I do enjoy reading about him, I definitely applaud Aveyard for not excusing or showing redemption for his behavior!

Over the course of this story I really felt more connected to Mare than I did in GS and through her narrative it was clear that Maven’s equally expanding rule would bring trouble for the Scarlet Guard as well!

I adored getting more from the world! We know there is more beyond the Kingdom of Norta and while we get a bigger scope of RQ’s history we also get introduced to the surrounding kingdoms and their rulers.

Another interesting addition was Multiple POV! I’ll be honest, my rating is low because while I enjoyed the new perspectives and adored the characters themselves, *Which I won’t spoil* and while I enjoyed both pretty equally,  I felt one of the POV’s both dragged the story and just directly told us of events going on behind the scenes, instead of letting us figure it out ourselves.

As for other aspects I really loved about King’s Cage:

~What truly took me by surprise was the inner turmoil and rebelling of the other Houses! How it was developed was something I really enjoyed. I loved how Aveyard showed the costs for Maven taking the throne! I was not expecting Maven to show stress/fear from his position!

~We get more development from characters like Evangeline, Maven of course, Kilorn and it was great to see different facets to their character. (Kilorn + Cal development was also done very well!)

~I loved the Cal + Mare development!

~Mare bonds more with the other women in this series which was awesome and I loved how they helped/relied on each other along the way!

Aside from some minor issues with the POV, I also took off a star b/c:

~I wish there more  page time with Cal + Maven! I felt this novel showed how big of a role they have in the series overall+ once Book 4 comes and overall it would have been great to get more scenes with them!

+ I tried my hardest to, but personally I just couldn’t avoid similarities between this novel and another I previously read before getting into King’s Cage! 😥

Regardless of those issues, King’s Cage is filled with fun twists and turns, expansion beyond Norta and overall this novel truly shines because of its characters! Aveyard as usual will leave you wanting the next book right away!