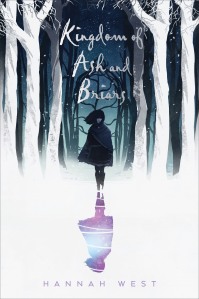 Summary: Bristal, an orphaned kitchen maid, lands in a gritty fairy tale gone wrong when she discovers she is an elicromancer with a knack for shape-shifting.

An ancient breed of immortal magic beings, elicromancers have been winnowed down to merely two – now three – after centuries of bloody conflict in the realm. Their gifts are fraught with responsibility, and sixteen-year-old Bristal is torn between two paths. Should she vow to seek the good of the world, to protect and serve mortals? Or should she follow the strength of her power, even if it leads to unknown terrors? She draws on her ability to disguise herself as a man to infiltrate a prince’s band of soldiers, and masquerades as a fairy godmother to shield a cursed princess, but time is running out. As an army of dark creatures grows closer, Bristal faces a supernatural war. To save the kingdoms, Bristal must find the courage to show her true form.

My Thoughts: *Thank you to the publisher for sending me a review copy! This in no way influences my thoughts!*

An immersive YA Fantasy that draws inspiration from classic fairy tales and weaves together a wonderfully crafted story that is both magical and filled with adventure!

Just as a warning, there may be some fangirling ahead!!

This book doesn’t come out for a couple days, but PLEASE do yourself a favor and add it to your TBR if you haven’t already + read it on release day/pre-order it if you can!!

Now I’ll try to explain in the best way I can, why I adored this book and why you should read it too! ❤

Fairy tales collide in this magical debut surrounding Bristol, a kitchen maid, who finds herself becoming an elicromancer!

From page one I was immediately transported to the world of Nissera and through Bristol’s 1st Person POV, I really felt both the worlds and the characters come to life!

The author introduces us to Bristol who realizes she has magical abilities (shapeshifting) after being brought against her will to a magical lake that awakens Elicromancers called The Water!

With her power resonating in an “Elicrin Stone,” she finds herself meeting Brack and Tamarice who have elicromancer abilities as well and they find it best to train her and fulfill their purpose of keeping peace across the 3 kingdoms:

But things aren’t as they seem, when someone threatens to upset the balance and bring Elicromancers to their former glory. But will do anything (even use dark elicromancy) to achieve it!

She then finds herself tasked with protecting all three kingdoms as best she can to prevent the evil from taking over!

With her power as a Clandestine she takes on a variety of appearances to find a way to unite the kingdoms!

The plot itself is very unique and while it introduces elements seen before, through the author’s writing and her wonderfully developed characters/world + the mix of classic fairy tales she creates a wholly original and immersive story!

I won’t get into tons of spoilers, because I found it fun to make my own connections along the way with Bristol coming to understand the world of Nissera.

I will admit at some moments the pacing is a little slow, but overall the story kept me turning the page!

+  There is a time jump in this novel (explained early on) and I will admit I was unsure how I felt about it in the beginning, but along the way with the characters and intricacy of the plot I grew to not only understand it, but felt it was perfect for the story!

2.Characters/World-Building:
Both of these aspects went hand in hand! The world of Nissera is both magical and fantastical!
You get that right away from the authors descriptions!

The fairy tale elements are seamlessly weave their way into the plot from Cinderella to Sleeping Beauty, even elements of Mulan.

I loved how each fairy tale connected to tell an epic tale! It was incredibly done!

She wrote her characters wonderfully!
Each and every character is written with such depth and you truly feel connected to each one through Britsol’s eyes!

With the task of taking on a variety of appearance’s Bristol finds herself struggling to understand who she is, while creating such deep connections with the friends she encounters along the way.

There is a war brewing and it was written so well! The build up is the best part! With Bristol traveling across the land to form alliances and prepare for the battle, it also gives background into Bristol’s past + the deeper/intricate plot that unfolds!

+ There are so many swoon-worthy princes in this story!! (Prince Anthony was my favorite BTW) ❤ ❤

I’ve seen so many fantasy series that have multiple books, however according to the author Kingdom Of Ash & Briars is a STANDALONE!
I don’t usually see that in YA Fantasy and it was definitely refreshing to see once I saw how the story wrapped up! However it just brings me to tears because that means:  I WON’T  have another book with these amazing characters and world.
I really felt this story was its own magical fairy tale come to life and loved it with each and every page!! ❤ ❤
Overall a magical debut that pays an homage to classic fairy tales, while weaving them together to deliver a tale magical and original all on its own!!
If you’ve read this KOAAB or are planning to, let me know in the comments below! 🙂
+ I’ll have a Reading Playlist For KOAAB Coming Sometime This Month!