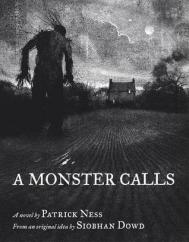 Summary: The monster showed up after midnight. As they do.

But it isn’t the monster Conor’s been expecting. He’s been expecting the one from his nightmare, the one he’s had nearly every night since his mother started her treatments, the one with the darkness and the wind and the screaming…

This monster is something different, though. Something ancient, something wild. And it wants the most dangerous thing of all from Conor.

It wants the truth.

Thoughts: I really love this trailer. Even though its just a teaser, I know the full trailer will be fantastic.

This trailer followed the book very well and really did not give too much away.

I also feel they got the monster quite well. Even though  we only see it for a few seconds, from what I saw the monster looked quite similar to the monster from the illustrations and book in general.

I feel the cinematography and overall feel of the trailer captured the eerie and mysterious tone of the book.

What are your thoughts on the trailer?

Have you read the book?

Does this trailer make you want to see the movie? 🙂